A giant Costco cake can be obliterated with the help of a few friends. 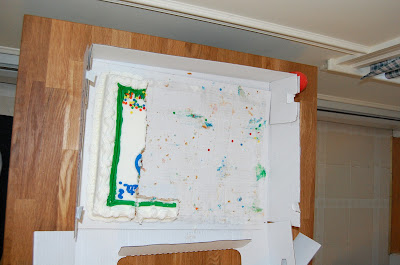 So thank you to all those who pitched in.

If you live in Mass, don’t forget to head to the polls to vote for Kennedy’s replacement. The ads last night were out of control, back to back insanity. So I’ll be glad when they disappear. At a little after 7am there was an impressive turnout. It impressed me at any rate.

So my civic duty is done for the day.

Yesterday I made yam tacos and they were darn tasty. Similar to the boniato tacos at my old favorite Agua Verde, these had leftover roasted yams cut up into little pieces, mixed in with some sautÃ©ed onions, piled into a corn tortilla and sprinkled with extra sharp cheddar.  I see why they add an avocado sauce because mine were slightly on the dry side.

Remember my poll about eating meat? Well, I have been chowing down on some turkey this weekend. I gotta say, it is tasty.  Lincoln the cat agrees.

The rest of the leftovers have been equally delicious. I’ve polished off the green beans.  There might be one square of cornbread left and a few rolls.  The mashed potatoes and sweet potatoes are dwindling.  The stuffing was finished off yesterday. There’s still plenty of pie, probably because everyone gets so full eating the other food that there isn’t enough room to squeeze two different kinds of pie in.

Anybody else scraping the bowls of Thanksgiving leftovers?

Here it is, folks. The filling bubbled out just a hair, causing a smoke storm in the kitchen.

But, it smells deeeeelicious. Happy Thanksgiving everyone! 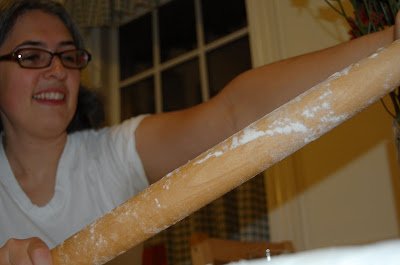 Potatoes, mashed or sweet each got three votes, along with stuffing.  It makes sense, I suppose.  That’s why we cook all these side dishes.  Everyone has a favorite.

I will definitely be making my chipotle party yams.  Amongst other things.

All right, all right, the food-filled holiday quickly approaches and I wanna know what’s gonna be next to that bird (or Tofurkey) on your table.

Or silver thermos.  I generally bring my lunch to work.  In the thermos that I got last year around this time.

Sometimes I have soup or chili, sometimes there’s beans and rice to be found inside.  I generally cook up a big batch of something on Sunday for the upcoming work week.  Some days I ditch the thermos and make a peanut butter and jelly sandwich.  I’ve also been known to go out from time to time.

What does everybody else do?  Pack a sandwich?  Leftovers?  Out to eat?  Eat at home? While on my recent family vacation, my brother reintroduced the idea of hard cider.  I sampled a few back in the days before I liked beer but then mostly forgot all about it.  Once the idea was back in my head, I was itching to give it another go.

In the liquor store, it dawned on me that I have no idea how to choose cider.  Granted, there aren’t that many options here in the United States, but I still felt a little intimidated.  I spotted Harpoon and snagged it because they generally do a good job of things.

I cracked one open this weekend.  I was expecting it to be fizzier than it was, but overall it was good.

Anybody else drink hard cider?  Any suggestions for what to buy?

If you’re lucky enough to score an invite to eat Jason’s famous pancakes, you accept with a resounding ‘hurrah’ and decide on plain or chocolate chip.

I went with plain.  Katie went with chocolate chip. 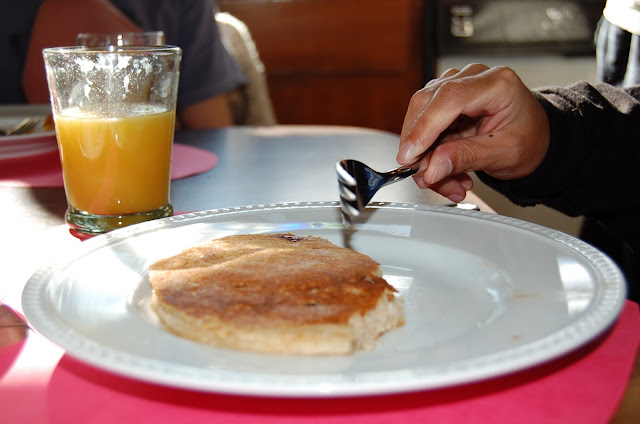